Got tired of running the old Android 2.2 Froyo firmware on my HTC Desire, so I decided to root it and upgrade to a custom Android ROM.

Rooted the phone using the unrevoked tool according to the steps of this article at theunlockr.com. This tool also runs on Linux. You might have to run it with sudo.

In addition to root the phone it also installs ClockworkMod Recovery which replaces the stock Android Recovery, to allow installing custom ROMs and provides some backup and restore functionality.

For me, no settings got lost in the rooting process, and I could use the phone just as normal afterwards. A rooted Android phone allows applications to run as the root user, so some applications might mess up your phone. This is required to install a custom Android system.

I used MyBackup to backup contacts, SMS and other settings. Used SMS Backup as a second backup for my SMS’s, which uploads the messages to my GMail account. To backup my apps I used MyBackup and Astro File Manager. Some backup applications requires a rooted phone, in that case you might backup what you can, then root the phone, and backup the rest before installing a new ROM.

The probably easiest way to install a custom ROM is to install the app ROM Manager from ClockworkMod. Personally I landed on CyanogenMod 7.0.3, running Android 2.3.3 Gingerbread. 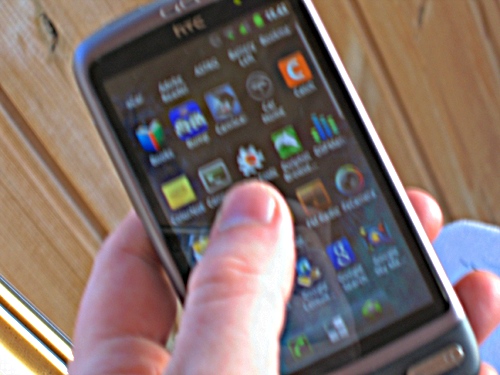 The phone worked great after installing CyanogenMod, here with all the old apps back in

Factory reset is probably needed
Booting the phone after installing CyanogenMod failed, it got stuck while booting, only showing the CyanogenMod boot logo spinning forever. This might be caused by some bad settings from the stock Android that CyanogenMod didn’t like very much. Pulled the battery out and into place again, and started the phone holding back button to get to CyanogenMod Recovery boot loader, to factory reset, losing all settings and applications. The SD card is left untouched by this operatoin. Glad I backuped up the most important apps, settings, contacts and SMSes to begin with

I tried to restore all the applications I previously had backed up, but applications that previously were installed on the SD card were restored to the internal storage, and failed when trying to move the app to SD card after restore. Had to uninstall those and install them once again from the Market. Application settings got lost in the process.

On most apps, it was just a matter to log in again to get back on track. I had to leave some apps after restore to keep the settings, especially apps that are not backed by online services, such as ColorNote. Uninstalling the app would erase the notes.

So, did I like it? It’s OK. The onscreen keyboard is a little different, but now I got the æøå keys at least. Since I’m Norwegian, that makes sense I guess. There is no dictionary, but I haven’t searched Android Market for it yet, so perhaps I don’t miss it. I miss the second-click on the home button to get an overview of all the desktops, but it’s not a big deal.

Somehow all contacts in my Google Circles got lost the other night. I don’t know why, maybe because of some defect in a backup restore process or re-install of the Google+ app, or it might be a glitch at Google…

Since HTC has abandoned us Desire owners, even lay to us after promising us the 2.3 version, it was time to move on to something other. I guess I don’t need the Sense shit anymore. Now I can move Google apps to SD card, and even delete those I never used! CyanogenMod works great!