A long time ago, in a … no, really, I can’t remember how long ago it was… but a long time ago I bought a Dreambox DM-7000-C, a 4 headed satellite dish and got a lot of channels. That was a fun time. But time changes fast and finally I got about zero channels. My last attempt to use the Dreambox with a legal Canal Digital (Conax) card failed, and so the Dreambox got stuffed away in a closet.

I came across it one day this summer and decided to give it another try. After all, it was VERY fast in changing channels. And I don’t have to wait two minutes on the Dreambox for the EPG to show either. I browsed the Internet for what firmware to use, and thought that since the box is very old, some final recommended image could be easily found… but no. 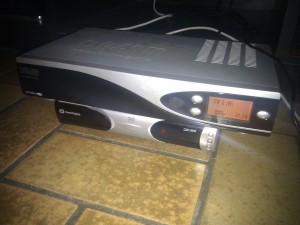 The Dreambox might be a lot bigger than the box from Canal Digital, but it's a lot faster too!

The world of Dreambox is kind of cloudy, with lots of forums of users with completely different experiences of what works like a dream and what “just sucks”, and of course a lot of broken links. After a while I came up with a list of possible candidates: Peter Pan, Pli jade, OpenPLi, SifTeam, EDG Nemesis and Gemini Project. I was only looking for images compatible with my DM-7000.

Peter Pan Neverland was the “nordic image” of choice, but is now outdated, last version from 13.01.2007.

I saw a forum post of one recommending SifTeam and after some research on my own I found out that they provided the newest image for my box, version 1.9.4c from 04.06.2010. I decided to give it a try, but had to scratch it since it froze to often.

Gemini Project seemed to be more focused on stuffing addons into the firmware such as web servers, SSH server, print server, you name it, than actually provide me with useful information about softcams and stuff needed for watching TV. Actually, to be open to you, I don’t like Gemini Project at all, after they injected a virus into their firmwares that bricked DM-500 clones (in norwegian).

I couldn’t find any information about EDG Nemesis other than the version number and that they have released version 5.0 beta in 08.11.2010. Since no changelog was provided, I decided to drop trying it.

PLi Jade seemed at first to be very old, a version from 27.06.2009, but there is a version called OpenPLi which provides daily builds. I kind of like the idea, but I very much doubt that they work on it daily. I still haven’t figured out when the last change actually was made. This is the version I decided to settle on. It runs smoothly, no crashes, the EPG works and after installing CCcam softcam it reads my Canal Digital card too and I “got the picture”.

A good source for Dreambox images can be found at the website of Dreambox Tool.

Ok, there it is. This is as far as I came on “the project” today, and it remains to see if the card gets updated entitlements or not. I guess the next thing I need is to set up some “bouquets” for easy access to the favourites.